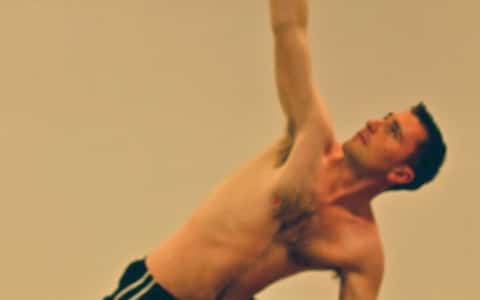 I have got to say that I took a lot of convincing to set foot in my first yoga class. Excuses came thick and fast and I just couldn’t persuade myself to take the plunge and do it. There are a range of misconceptions attached to yoga from a male perspective. I was guilty of thinking that yoga was for girls. I thought it would be too easy and full of airy fairy people, jumping about doing a bunch of stretches in leotards. There was no way you would see me in a yoga class, no way!

In 2011, after months of badgering, cajoling and pestering, my girlfriend got me to attend my first Bikram Yoga class. I thought it was going to be a piece of cake, I mean how hard can yoga be, it’s for girls right? I was more worried about what my male friends would think about me attending a yoga class at this point than anything else. I came to the conclusion, I just wouldn’t tell them.

I had my water and my towel, took my place and laid down my yoga mat. The teacher talked for a few moments and said “the most important part of your first class is to stay in the room”. Yeah right, I thought what does this guy know? After a few postures the heat and humidity kicked in and I thought hang on a minute, what’s happening here? For someone who has a high level of fitness and is used to pushing myself physically and mentally, I struggled to comprehend what my body was going through. After 30 minutes all I could think about was leaving the room! All of a sudden the instructor’s words rung true and I had to mentally convince myself to stay in the room.

I could not touch my toes before my first class and I was extremely inflexible which made things 100 times worse. I kept thinking, when is this going to end, when is this going to end? After 90 long minutes it ended, I got through it. I lay on my mat with emotions whirling around my head. The overriding feeling was pure joy and such a sense of achievement. Relief was washing over my body and adrenalin was racing through my blood.

When I walked out of the studio I realised something. I was humbled. My entire lifelong perception of yoga was shattered in 90 minutes. I was shattered! It was one of the toughest workouts I have experienced. What a sleep I got that evening.

Did I tell my male friends? You’re absolutely right I did. Did I take a bit of abuse? You’re absolutely right I did. After long periods convincing my male’s friends, they too took the ‘monumental male leap of faith’ to go as well. Again their preconceptions of yoga were obliterated after a 90 minute class. At this point I had no idea how Bikram would change the course of my life but that’s a story for another day.

I would defy anyone who said yoga was for girls to come along for a 90 minute class and tell me what their thoughts are afterwards. Bikram Yoga is for everyone, male, female, old, young, tall, small.

The hardest things for everyone before their first class, is thinking about it.